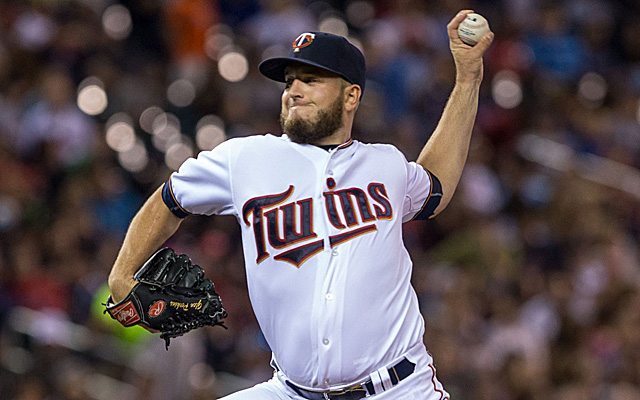 The Twins are once again riding high, but they’ve gotten some bad news in front of a big road trip. All-Star closer Glen Perkins has a lingering back issue and that sounds pretty bad for the time being. Glen Perkins can barely walk. He’s baffled at how he ended up with a back spasms. Definitely not going on trip — LaVelle E. Neal III (@LaVelleNeal) September 3, 2015 Understatement alert: Having back issues to the point where it’s tough to walk might make it difficult to pitch. Seems like the back is important there. Since becoming the closer full-time, Perkins has been an All-Star all three chances he’s had. This season, he’s converted 32 of 34 save chances with a 2.68 ERA, 1.13 WHIP and 46 strikeouts against only eight walks in 50 1/3 innings. He has dealt with neck back issues for a lot of the second half. Given this, the Twins can absorb the injury. Glen Perkins is having trouble walking due to his back injury. (USATSI) Kevin Jepsen is having an excellent season and has five saves since joining the Twins. Now that we’re in September, expanded rosters can protect better against injuries to relievers, too. Still, Perkins’ loss moves everyone up a spot in the bullpen and the upcoming road trip shows three games in Houston and three in Kansas City before a trip to face the White Sox. If Perkins misses those first two series, the Twins have a chance to feel it. The 69-63 Twins are one game back of the Rangers for the second AL wild card spot.
Read more on Twins’ Perkins has back spasms, out indefinitely – CBS Sports MLB News

About IntPicks.com Team 696 Articles
IntPicks.com was founded by a Mensa member who is fascinated by the science of sports handicapping and made a career in forecasting business trends in various industries. We keep delivering winning sports betting picks since 2012 on IntPicks.com
Website

Friday afternoon was the deadline for teams to make their free agents a qualifying offer. The QO is a one-year, $15.8-million contract that entitles the player’s former team to draft-pick compensation if he signs [Read More]

We use cookies on our website to give you the most relevant experience by remembering your preferences and repeat visits. By clicking “Accept”, you consent to the use of ALL the cookies.
Do not sell my personal information.
Cookie settingsACCEPT
Manage consent

This website uses cookies to improve your experience while you navigate through the website. Out of these, the cookies that are categorized as necessary are stored on your browser as they are essential for the working of basic functionalities of the website. We also use third-party cookies that help us analyze and understand how you use this website. These cookies will be stored in your browser only with your consent. You also have the option to opt-out of these cookies. But opting out of some of these cookies may affect your browsing experience.
Necessary Always Enabled
Necessary cookies are absolutely essential for the website to function properly. These cookies ensure basic functionalities and security features of the website, anonymously.
Functional
Functional cookies help to perform certain functionalities like sharing the content of the website on social media platforms, collect feedbacks, and other third-party features.
Performance
Performance cookies are used to understand and analyze the key performance indexes of the website which helps in delivering a better user experience for the visitors.
Analytics
Analytical cookies are used to understand how visitors interact with the website. These cookies help provide information on metrics the number of visitors, bounce rate, traffic source, etc.
Advertisement
Advertisement cookies are used to provide visitors with relevant ads and marketing campaigns. These cookies track visitors across websites and collect information to provide customized ads.
Others
Other uncategorized cookies are those that are being analyzed and have not been classified into a category as yet.
SAVE & ACCEPT